Esther Derby and Mike Lowery introduced “Reframing” in their session on “Coaching Flow“. It aims to change attitudes before entering a crucial conversation.

If you are about to have a difficult conversation with someone, it won’t help, if you think of the other person as a lazy idiot or other negative labels.

If you can enter the conversation with a mindset of respect, well, that will help a lot. Your whole attitude and willingness to listen will be better geared to resolve the conflict.

I’ve always been good with words, so I expected it to be easy. It’s not. This exercise kind of backfired, because there were a number of attributes we didn’t manage to reframe. Not even when we pooled our brains and helped each other find words. Despite only modeate reframing success, we still had a lot of fun! And one participant in particular turned out to be quite the euphemistic wordsmith.

In the “stuck” cases, it would have helped us to have a list for inspiration. I don’t know of any such list, so I have started to collect reframing possibilities in this spreadsheet.

Please add your reframings and improve the existing ones! Right now, “confident” and “flexible” have to work much too heavy duty. Thank you in advance!

Disclaimer: Don’t use the list right away! Try to find neutral and positive words of your own! The list is only for when you’re stuck and think it’s “impossible”. Have fun reframing!

Thanks, Esther and Mike for “Coaching Flow“!

Listen up, y’all, Claudia Sandoval has created a thing of beauty!

She’s collected all known sketchnotes from Agile 2015 into an amazing PDF called “Agile 2015 – Little Book of Sketchnotes“. I’m honored to have my sketchnotes next to hers, Renee Troughton’s, Elizabeth McClellan‘s and Tim Meyers‘s. It’s a joy to flip through the PDF and see the different styles!

Check it out here

Thanks to my fellow contributors & especially Claudia for putting this together!

It’s based on the belief that each of us has one default “toxic” = “less than helpful” behavior they fall back on in times of conflict and stress.

These 4 toxic behaviours are Stonewalling, Defensiveness, Blaming and Contempt.

In the original game, everybody writes down their default toxin on an “Hello, I’m …” sticker. Then you go about the room shaking people’s hands, each of you introducing themselves: “Hi, I’m Blaming.” “Nice to meet you Blaming, I’m Contempt.”

We were only 7, not 100 like in Jake’s session, so we “played” it differently. After writing down our main toxin someone suggested that the others try to guess yours, before you reveal it.

Disclaimer: You should only ever assess yourself, not others!

That being disclaimed, we were a fun little, high trust group and everybody opted-in into the other-assessment. So we did it, with very interesting results: For all but 2 (out of 7 people) self- and other-assessment were exact opposites!

For example, I’m a die-hard stonewaller. I’ll bite my tongue for a very long time until I finally erupt in frustration. The others pegged me for Blaming, Defensiveness and Contempt, but no vote for Stonewalling. These differing views were typical.

No clue, if that is because we’re really bad at self-assessment or assessing others or both. In my case the stonewalling is something I try hard to overcome at work, because I’ve seen that it leads nowhere. Nowhere nice, anyway. (In private I don’t try as hard, although it would be helpful.)

In fact, many of the participants remarked that they fall onto different toxins at work and at home. Or that the toxin depends on the person they have the conflict with. Interesting! I haven’t asked but would guess that it depends on the level of trust between the both of them.

Last observation: Although the label “defensiveness” seemed fitting for some people’s behaviors, the descriptions (“Not open to influence”, etc.)  didn’t fit anyone. I wonder if we’ve got a different concept of “defensiveness” or if there’s just many more possible manifestations of it than the given 3.

After the assessments we talked briefly about the antidotes to the toxic behaviors:

Play this game during a team liftoff so that people will know what behaviour to expect of each other when the shit hits the fan. The game can also inform Working Agreements. You probably don’t need “We stay respectful” in a team of Stonewallers. How about “We openly address things that annoy us, even and especially, very small things”?

Thanks to Jake Calabrese for introducing us to team toxins!

Somehow I ended up attending a lot of sessions related to Conflict at Agile2015. Back at home I offered a workshop to share 3 games / exercises with the wider company. I’ll share the games and our experiences with them in this and the next 2 posts.

First off is “What color is Conflict?” from Ellen Grove‘s workshop “Games for Learning about Conflict Resolution” (my favorite session of all of Agile 2015, BTW).

All you have to do is scatter a number of color swatches (pilfer paint samples from Home Depot?) on the table.

Each person has to pick the color that they associate with conflict. Then you go around the table and everyone explains why they picked their color. Even if most people pick red, they pick it for different reasons and those reasons are interesting.

This game is great for a new team that’s just starting out together, e.g. during a liftoff. It lets each team member know all the others’ attitudes towards conflict.

Thanks to Ellen for her inspiring workshop!

PS: I pondered conflict so much since Agile 2015 that conflict is now a different color to me than it used to be. Curious, eh?

Here’s a game for newly-formed teams that you could play during a liftoff: “Explain, Explore”. It’s from Luke Lackrone‘s engaging session “#awkward – Coaching a new team“.

All you need is a piece of paper and pen per person. It’s probably more fun with more people. 8 or more participants would be good.

In the Explain round, everybody writes down a word or phrase that is true for them. Then they team up with someone else, preferably someone they don’t know yet. The partners exchange names and then explain to each other, why their description is true for them.

Now you mix things up. People walk about the room and swap their notes for someone else’s at least 3 times.

After swapping, the Explore round begins with finding a new partner. Everybody checks the description they got via swapping and explore in what respect that might be true for them, too.

It’s a fun game that serves 2 objectives: Getting to know each other and taking on a new perspective. To quote Luke Lackrone:

I always like to say one of the outcomes here is to point out two mindsets. The Explain mindset is easy for us: we can explain something true about us easily to others; but the Explore mindset encourages us to push through surface resistance and connect things that aren’t obvious. For example, I might get a card that says, “Mom” but I’m not a mom. How might that be true for me? Well, perhaps the traits of a mom — giving structure, loving, teaching — reflect how I interact with my team. Maybe I’m the team mom!

As teams are going through agile transformation, or even routine self-improvement, we want to encourage them to live more and more in the Explore mindset.

Thanks, Luke, for sharing this game, the equally great “Journey Lines“, and your help proof reading this post!

PS: How awesome is “Luke Lackrone” for a name, eh? I need to write a novel just so that I can name a character thusly 🙂

Dajo Breddels and Paul Kuijten brought their crafty PO Value Game to Agile 2015. I was lucky enough to get a spot to play and with a really advanced group, too!

To me, the game has 2 valuable lessons to teach:

I’ve already got a deck of the game cards + dice at work and hope to play with my POs on Wednesday – really recommend it for all Product Owners and executives! You can get it here:

PS: Like what you're reading? Join Corinna's Retromat newsletter!

In my current talk “Thank God it’s Open Friday” I describe our experiences at sipgate with holding an Open Space every other week.

If you’ve missed it, you can watch a recording (55 minutes) or read the paper. There are also slides, but they are not self-explanatory.

So far, I’ve given it at Agile and FrOSCon. Both times I’ve gotten great questions! In this post I’d like to collect questions and answers:

[Update: After reading Johanna Rothman’s comment, a better title for this post would have been “What is Reflective Coaching anyway”.]

The other day I found out that my husband’s definition of what it means “to coach someone” was very different from mine. His was a sports one, i.e. someone who observes and then gives hints what to do differently. It seems to be a popular notion. Last week, Johanna Rothman quoted Consulting Role: Principles and Dynamics of Matching Role to Situation, by Champion, Kiel and McLendon with this definition of a Coaching: “You did well; you can add this next time.”

Mine is different, though and given the high number of coaching related sessions I attended at Agile 2015, I will probably talk a lot about Coaching. Hence it might be good to clarify what I mean, when I use the word.

For starters let me point out that Agile Coaches very often do not actually “coach”. Take this framework by the Agile Coaching Institute:

You’ll notice that Professional Coaching is only 1 of 4 possible activities, next to Teaching, Mentoring and Facilitating. At least in the beginning of an engagement Agile Coaches often have their hands full Teaching and Facilitating and that’s okay. Advice and orientation is often what people need and seek.

In contrast, coaching is the act of creating and “holding” a safe space in which the coachee can find answers in and by themselves.

For the most part, for me that translates into shutting the fuck up and doing some serious listening. As a coach you don’t have to have all the answers. But you better bring some pretty great questions! Powerful questions for example. Or clean questions.

How about you? What’s your definition of Coaching?

Have you noticed how many canvases are around these days? Business Model Canvas. Lean Canvas. Value Proposition Canvas… Can’t we think of any other approach anymore?

That’s why I was a little hesitant when Olaf Lewitz and Martin Alaimo opened up their “Great Coaching Conversations Workshop” with the “Coaching Canvas“. Yeah, right… 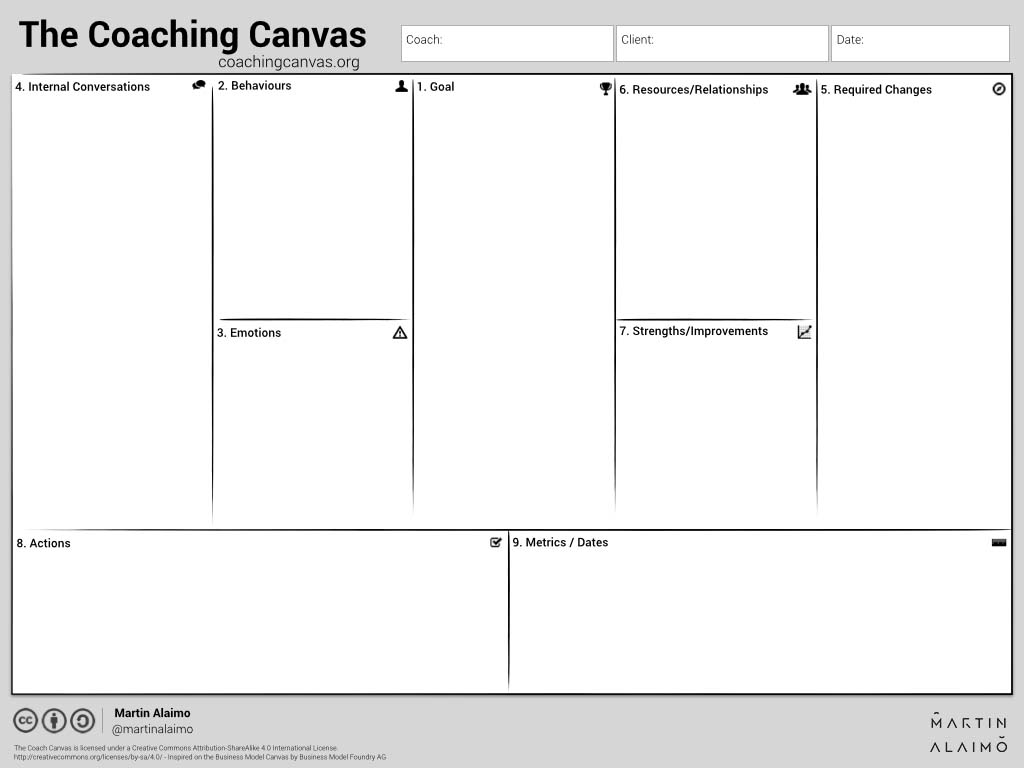 How I regret thinking that! It totally worked! We paired up and took turns being coach and coachee.

We had a list of Powerful Questions to pick from for each field of the canvas. Together with the canvas this was enough rigging so that 100+ people had insightful conversations. Some even had coaching conversations:

I had one, for example. I had a profound realization about myself and how I view tricky situations. This realization might well change my (career) path sometime in the future. Still mulling it over.

I guess what I’m saying is: If you’ve got a coaching situation on your hand and don’t have much experience in coaching, absolutely do give the Coaching Canvas + Powerful Questions a shot! You’ll be surprised!

Agile 2015 was hugely inspiring and I’ve got ideas for about threlvish blog posts. I thought it might be a good idea to collect them in a central place and – voila – here you’ll find everything related to or inspired by Agile 2015 in Washington: