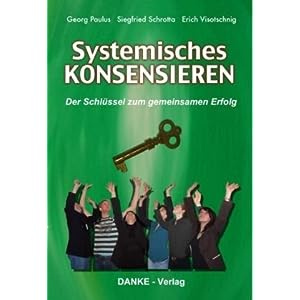 You know that saying “Don’t judge a book by its cover”? Well, I usually do jugde a book by its cover and I’d never have bought “Systemisches KONSENSIEREN” (“Systemic CONSENSUS”)! When a colleague dropped it on desk, I made fun of it – its whole appearance is “touchy-feely” in a bad way and, come on, CAPS? Really?

Fortunately, I picked the book up on a whim and its main (and only) idea immediately took the top position on my list of “things to try out”: When voting, don’t have the usual majority vote that generates winners and losers. Turn traditional voting upside down and determine least resistance!

Let me illustrate how that works with the first example in the book: There were 4 high-paid marketing people working on an ad campaign for a car. Everything was finished and decided, except for what color the car should have in the ad. They each strongly wanted a different color and majority vote always turned out like this:

Various attempts to agree among themselves were fruitless. Neither could they agree on whom else they might bring in to settle the matter. And the client said it was the professionals’ call. A deadlock.

Enter systemic consensus: Each of the 4 parties rates their rejection of each option on a scale from 0 (no resistance, I totally want this) to 10 (I’ll kill myself, if we take this). The result this time:

Yay, we’ve got a winner: Darkblue meets least resistance. Everyone can live with this color.

Given, in this simple case, they might have also reached a decision with an acceptance-based mechanisms finer grained than “1 vote only”. So why use “resistance” which rings negative with many people? Why not vote “acceptance” on a scale from 0 to 10?

Let me quote Diana Leafe Christian describing her first encounter with systemic consensus in something similar to a town hall meeting:

[…] I had trouble with “resistance” points. He [Ronald] helped me understand that they’re used for psychological, not mathematical reasons. If you ask people to think about why they want something, he said, they may not think about it as clearly as when you ask them why they don’t want it. If people have to ask themselves, “How much do I not want this?” — it forces them to better analyze the proposal.

The book states additional advantages as:

The authors claim that systemic consensus cannot be gamed by malicious parties. Their examples didn’t quite convince me. I’d need a lazy afternoon and my game theory hat to think about it in depth. Anyway, I’m usually not among malicious people and eager to give this a shot!

Do you want to know more?

Do you have first hand experience with systemic consensus? How did it work out for you?

Corinna Baldauf has filled every Scrum role there is and then some. Currently she spends most of her days writing and occasionally facilitating retrospectives. She's interested in lean, agile, coaching, leadership & UX. You can follow her on Twitter, subscribe to her (Retromat) newsletter and buy her books.